On Friday, February 15th, 2019 Kansas Heart Hospital (“KHH”) will celebrate its twentieth year of providing cardiovascular, vascular surgical and cardiac surgical care to the residents of Kansas and northern Oklahoma. Recently, Greg Duick M.D., President, Chairman and co-Founder of KHH, was asked to reflect on the KHH experience. “What began as a new idea and a different way of providing heart care to patients in 1996 has withstood the test of time. The hospital has become a nationally recognized destination for quality and service and an integral part of the Wichita healthcare community. Only two Kansas hospitals, namely, KHH and Shawnee Mission Medical Center (out of a possible 3,600-plus hospitals ranked nationally) have continuously received Medicare’s highest five star designation each and every year since quality measures and patient satisfaction measures were first reported by Medicare in October, 2016.”

Dr. Duick commented further that “in 1996, we knew healthcare was changing. Patients, physicians, nurses and other healthcare providers were feeling disenfranchised and disengaged by the many rapid changes which were occurring. Additionally, the hospital workplace was under pressure to “do more with less” leading to employee dissatisfaction. In this context and under siege by the seismic cultural shift away from personal care, truly compassionate care and great service, the KHH “experiment” was born.” The central theme of KHH was to re-emphasize the role of nurses and doctors, encouraging each to control and do “what is best for their patients.” KHH introduced a nursing centered delivery model embracing fixed nursing ratios which in turn limited the number of patients per nurse and provided the opportunity for nurses to focus on their patients in concert with their physician partners and fellow KHH employees. Physicians held a majority position on the KHH board assuring that their concerns and recommendations would be addressed at the highest level. At the time these concepts were ground breaking, new, empowering and continue to this day, unchanged.

Steve Smith, Chief Financial Officer at KHH since August, 1998, believes there are three major keys to the hospital’s long term viability and success.  “KHH has enjoyed continuity of leadership at the board level, at the administrative level and at the physician level. For example, Dr. Tom Ashcom has been CEO of the hospital since 2004. Founding physicians who were present at the beginning continue to serve on the hospital board and in leadership positions on the medical staff. Secondly, KHH was founded on a culture of caring, responsibility and accountability which has been sustained to the present. Lastly, the employees of KHH are exemplary and this year 20% of the original hires will receive their 20 year recognition pins.” Having arrived in October, 2011 after the retirement of KHH’s original COO, Joyce Heismeyer, echoes a similar sentiment. “When I first interviewed for my position, it was apparent that walking through the hospital’s corridors something was different at KHH; indeed, much different than any other hospital I had ever previously experienced. I identified it as a culture which understood the fundamentals of both care and quality for patients, for families and fellow employees.” 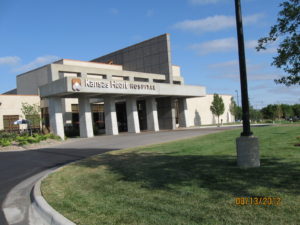 In closing, Dr. Duick commented, “I have been privileged and honored to have worked with and for so many fine members of the KHH family as well as my physician colleagues over many years. KHH has its own legacy, a legacy of quality and caring nurtured by the best physicians and hospital staff in Kansas.”