Although the Kansas Heart Hospital did not officially open until February 15th, 1999, the inaugural Kansas Heart Hospital Charity Golf Tournament was played in August, 1999. Each and every year proceeds from the tournament have been donated to the American Heart Association, Sedgwick County division. “We are proud of our hospital’s success and our longterm association with the American Heart Association over the past twenty years,” said Greg Duick M.D., president of the hospital. Steve Smith, chief financial officer, added, “I began my Kansas Heart Hospital career in August, 1998 and together with Vic King, ICU nurse, and Dr. Doug Milfeld, retired cardiothoracic surgeon, we have organized each and every tournament over those twenty years. We are most grateful and thankful to our sponsor support over the years as well as our club host, the Wichita Country Club.”

This year’s golf tournament, once again, was held at the Wichita Country Club on Saturday, August 25th, 2018 on a very warm and very windy Saturday afternoon which challenged all participants. At the end of the day, the team of Missy Donaldson, Pat May, Bruce Pringle and Doug Minson, became our celebrated 20th year champions. A poolside, outdoor dinner buffet was provided by the Wichita Country Club and concluded with the annual awards’ ceremony. As master of ceremonies, Dr. Milfeld commented, “I can’t believe we have been doing this for twenty years and I have never won!” 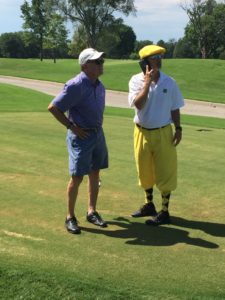 Lastly, the tournament has a special word of thanks for our volunteers who worked on this year’s tournament which include Dana Minson, cath lab technician, Karly Hartley, ICU nurse, and Renell Woodard, ICU nurse.