CMS (Medicare) wants patients and the public in general to be informed about their healthcare providers including hospitals, doctors, nursing homes etc. In order to do so, CMS has devised a quality based scoring system which includes sixty-two (62) core metrics in order to classify hospitals throughout the US. In essence, CMS wants to provide consumers an “apples-to-apples” comparison of hospitals throughout the United States. CMS has adopted a STAR rating format, ranked from lowest, i.e., ONE (*) STAR to the highest, i.e., FIVE (*****) STAR in order to make it easy for consumers to identify and compare quality throughout the Medicare provider hospital world. The initial rankings were released in July, 2016 and during that ranking five hospitals in Kansas, including Kansas Heart Hospital achieved 5 (*****) STAR status. The most recent rankings were released in December, 2016. Previously 102 hospitals in the US received Medicare’s highest FIVE STAR rating and currently only 83 hospitals received the prestigious FIVE STAR ranking out of 3,617 participating hospitals throughout the country. Between July and December, 2016, CMS refined its quality based scoring system based on feedback from consumers, hospitals and other interested parties. The total number of participant hospitals in December, 2016 was identical to the initial number of participating hospitals in June, 2016.

“All else being equal, it is clear that Medicare has raised the bar for achieving 5 STAR status, given the fact that there was a 20 percent decrease in hospitals achieving a 5 STAR rating in December versus July, 2016,” commented COO, Joyce Heismeyer. “Alternatively, if the scoring system remained essentially unchanged from July, 2016, it highlights the difficulties of providing consistently outstanding quality. In either case, I am so proud of Kansas Heart Hospital since it has received 5 STAR status for two consecutive periods.” Steve Smith, CFO, added, “Our heart hospital is known for quality. Kansas Heart Hospital and Shawnee Mission Hospital were the only 5 STAR hospitals in Kansas during this latest December ranking.”

For further hospital rankings, click here to go to Hospital Compare at Medicare.gov. 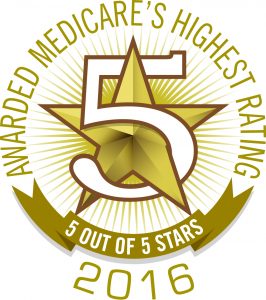