LIGHTS OUT AT KANSAS HEART CAUSED BY POWERFUL STORMS 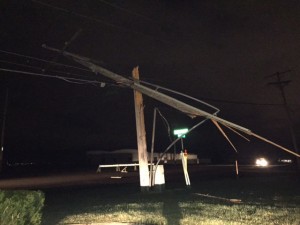 During the late evening hours of Thursday, April 2, 2015 strong storms characterized by rain, hail and wind gusts up to 70 to 90 miles per hour swept through south central Kansas and Sedgwick County causing major power-outages in Wichita. Especially hard-hit, was northeast Wichita…. Kansas Heart Hospital (KHH) was not spared.

Joyce Heismeyer, COO and Emergency Disaster Coordinator (EDC) for KHH, stated that “we lost power at about 12:20 AM on Friday morning. I received a call from Kathy Church, RN, our night supervisor, who mentioned that the generators were working and keeping vital areas operational.”

Hail and rain pounded homes and businesses throughout the area causing widespread damage. Downed trees, tree limbs, power lines and property damage were widespread. Across Webb Road from KHH, a large airplane hanger at Jabara Airport was reduced to rubble with serious damage to several King-Air planes located in the hanger. The Jabara Airport runway had to be closed for several hours early Friday because of scattered debris.

“I was unable to travel on Webb Road north of K-96 because power lines and poles were down blocking the street,” said Susan Bradford, Chief Nursing Officer (CNO). She added, “Our staff made sure our patients were safe throughout the night.” Arrangements for patient dismissals on Friday proceeded in an orderly fashion but any new potential admissions were diverted to other area facilities. “Although we lost power the straight-line winds did not cause any roof or window damage,” said Steve Smith, CFO, “and for that, we are grateful.” At one point in time it was reported that up to 70,000 Wichita residents were without power and by 10:00 PM Friday that number approximated 26,000 residents. KHH had their downed poles replaced and power restored by 6:30 PM Saturday night. “As a hospital, we received priority attention by Westar Energy and we were fortunate to have our power restored so quickly given the extent of storm damage,” commented Glen Leonard, maintenance supervisor. Friday, April 3rd….a day to remember, a storm to forget!