On Valentine’s Day 2014, doctors, employees and staff celebrated the fifteenth year since the opening of Kansas Heart Hospital on February 15, 1999. Birthday cake, red roses and commemorative award pins were awarded for years of service. Dr. Duick, co-founder, President and Chairman, as well as Steve Smith, CFO, were two of several recipients of the 15 year service pins. Dr. Tom Aschom was awarded a 10 year service pin for his role as Chief Executive Officer which began in February, 2004.

There were twenty (20) 15 year, eight (8) 10 year and two (2) 5 year service awards given out to dedicated employees. At the awards ceremony, Dr. Duick commented that “I was instrumental in helping put bricks and mortar in place but our dedicated employees have made Kansas Heart Hospital a center of cardiovascular excellence for Wichita and the state of Kansas.”

Longtime Manager of Respiratory Therapy and a 15 year service award recipient, Ben Hedges added, “It has been a heckuva run and I’ve had the opportunity to work with the best of the best.”

Going strong at “age 15”…the best is yet to come was echoed by many on this day of joy and celebration. 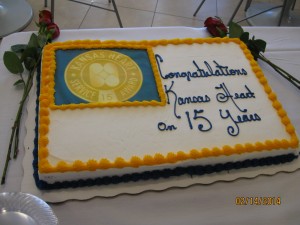