Carol’s husband, Alan, attended grade school with Susan Bradford in Elmdale and Carol’s daughter-in-law, Leah Giger RN began working at Kansas Heart Hospital in 2001. Carol, as she puts it, “hooked them up,” namely, Leah, and Carol’s son, Ben, who was working the family farm. Ben and Leah were married on August 30th, 2002 and are the proud parents of four boys. Currently, Leah continues to work part-time at the hospital and, like her mother-in-law, makes the 75 mile commute back and forth.

In the January, 2014 edition of Kansas Farmer Alan and Ben discuss their farming operation and plans for the future. For now the Giger families are combining a rural life style with farming in Elmdale and nursing careers in Wichita. It works well for everybody.

You can read the Kansas Farmer article online by clicking here. 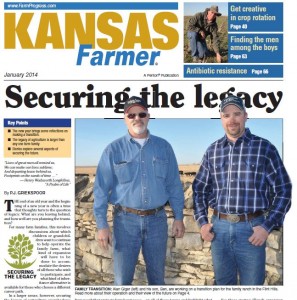