Dr. Ernest Hoeckel, anesthesiologist was presented with Employer’s Support for the Guard and Reserve’s (ESGR) Pro Patria Award. This award is presented annually by each ESGR State Committee to one small, one large and one public sector employer in their state. Recipients have demonstrated the greatest support to Guard and Reserve employees through their leadership and practices, including adopting personnel policies that make it easier for employees to participate in the National Guard and Reserves. This is the highest level award that may be bestowed by a state ESGR committee.

Employers who have been honored with the Above and Beyond Award, who have had at least one supervisor or other representative honored with a Patriot Award, and who have signed a Statement of Support are eligible for the Pro Patria Award. In May of 2012, Dr. Hoeckel and KHH were each presented with the Patriot Award for supporting Jeremy Salsbury, a nurse anesthetist who serves as a captain in the Army Reserves.

Dr. Hoeckel accepted the award and stated, “I accept this award on behalf of the entire hospital because it was with their support that I was able to continue on while Jeremy was deployed and on reserve leave.”

Congratulations, Dr. Hoeckel, and thank you for your leadership and support of our military! 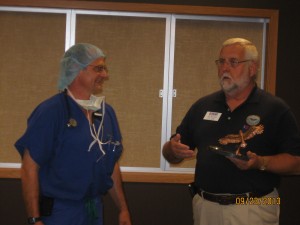