The September, 2013, issue of Consumer Reports rated 2,463 hospitals across the United States in their keynote article, “Your safer-surgery survival guide.” Criteria for ratings focused on a specific quality measure, namely, the percentage of Medicare patients undergoing surgery who die in the hospital or stay longer than expected. The article highlighted the following interesting findings: (1) some hospitals do a much better job than others even in the same geographical area, (2) teaching hospitals which are traditionally thought to be the nation’s best and who likewise receive generous federal funding, “often fell short in our surgical ratings,” (3) urban as well as rural hospitals can excel, (4) big-name hospitals don’t always live up to their reputation, (5) hospital choice matters for special procedures. For example, the same hospital may be excellent in one area such as coronary angioplasty and below average in another area such as carotid surgery and (6) specialty hospitals tend to perform better than non-specialty hospitals.

Dr. Duick quickly added that “we have truly been fortunate to have Dr, Steve Hutchinson, vascular surgeon, as our leader since the hospital began. I first met Steve when he rotated on our cardiology service as a surgical resident at the University of Kansas – Wichita branch. Even then he demonstrated outstanding surgical skills and judgment.” 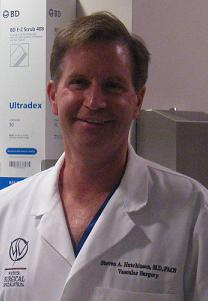 Steve Hutchinson MD, FACS obtained his medical degree and general surgical training at the University of Kansas. Afterwards, he spent an additional year in a vascular surgery fellowship at the Mayo Clinic. He began his clinical practice of vascular surgery in 1990 and joined the Kansas Heart Hospital team in 1999. When asked about his practice at KHH, he commented, “The surgical team is focused, doing one surgery or procedure at a time and doing it well. KHH is a center of vascular surgery excellence, in large part, because of its outstanding surgical staff which is characterized by many dedicated individuals, working together, over a long period of time.” When asked about the changes in vascular surgery during his time in practice, he commented, “Endovascular techniques for abdominal aneurysms, hybrid stenting / ballooning of lower extremities in conjunction with surgery at the same time, to name a few.”

Together with Jason Woolard MD and Alex Ammar MD, the vascular surgical team has long praised their surgical staff. Carla Nelson RN and Manager of the OR has been a cardiovascular nurse since 1989.

“What I enjoy most at KHH is working with our outstanding surgeons and the entire surgical team, including perfusionists, anesthesia, sono techs, x-ray personnel, cath techs and our intra-operative scrub team.” She went on to say that “our surgeons exhibit tremendous surgical skills and talent combined with good judgment and years of experience. Most importantly, our three vascular surgeons have the utmost professional respect for each other.” All three vascular surgeons are members of Wichita Surgical Specialist, P.A., one of the largest pure surgical groups in the country.

Read the full article on Consumerresports.org by clicking here.