Walking in Memory of Jason

The annual Heart Walk is sponsored by the American Heart Association and was held on Wednesday afternoon, May 1st, 2013. The American Heart Association is the largest voluntary health organization working to prevent, treat and defeat heart disease, stroke and other cardiovascular diseases. The Heart Walk is a local event organized to support this cause.

Although the weather was less than cooperative, KHH showed up in large numbers to walk/run in memory of Jason Korinek, a co-worker, family member and friend, who recently died from a heart attack. KHH employees were joined by several of Jason’s family members, including his fiancé, parents, sister as well as an aunt and uncle.

Bill and Ann Korinek, parents of Jason, stopped by Kansas Heart Hospital earlier in the day to pick up their custom designed tee-shirts. They spoke about the times when they would visit Jason at KHH where he worked as a nurse in ICU. “Jason loved this hospital. He felt like he was with family here,” said his father.

Jason’s ICU co-workers felt the same way about working with him. “There’s not a shift that goes by that Jason isn’t missed or mentioned,” said Karen, RN/ICU. To further honor his memory the ICU staff will create a memorial plaque with his picture prominently displayed in the KHH ICU area.

Although KHH participates in the Heart Walk annually this year’s event was a little more personal since heart disease “took one of our own.” Jason may be gone, but his memory will live on at KHH and with the many patients he served. 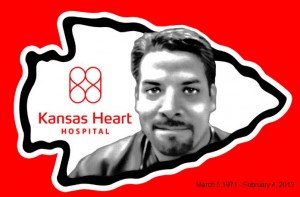