The Day of the Big Snow Storm 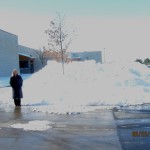 Weather outlets were predicting an unusually large snow storm for the entire state of Kansas beginning the evening of February 20th into the majority of the next day. Mother Nature didn’t disappoint and Wichita, including the Kansas Heart Hospital, was buried under 14.2 inches of snow which, according to the Wichita Eagle, was the largest snow accumulation in the city since 1962.

“I couldn’t drive to work since my car was blocked by at least a three foot snow drift in our driveway,” said Joyce Heismeyer, COO, who later in the day made the journey in her husband’s car. Employees braved the elements in order to come to the hospital.  Glen who works in maintenance drove fifty-six miles round-trip to Clearwater, Kansas and back to the hospital in order to pick-up Karen, RN, who works in the SICU. Two RN’s, Marsha who resides in Colwich and Carol RN, who lives in rural Elmdale which is eighty miles from Wichita, stayed overnight in hospital provided hotel accommodations. Carla RN and Vicki RN also stayed overnight at the hospital in order to make certain that surgery would begin on-time.

“You know it’s got to be bad outside when Mc Donald’s closes,” said a visitor. However, the heart hospital cafeteria wasn’t closed and provided all employees and contract employees lunch at no cost.

The great winter storm of 2013 has passed but the dedication of the heart hospital nurses and staff employees has not. Making a difference, taking care of patients and each other during difficult circumstances is much appreciated, no more so than by the patients we all serve.

Go to the photo gallery to see pictures of the “2013 snow storm.”  Click here to read the article about the storm.