Lynn: “I grew up in the little town of Leesville, Louisiana which is located in northwest Louisiana and went to undergraduate school and received my B.A. degree in business from Northwestern State College in neighboring Natchitoches; I received an MBA from Columbus College in the late 1970’s.”

News Beat: “How did you get started in healthcare?” 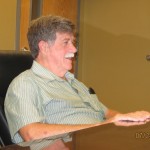 Lynn: “After college in 1966 I signed up for the Army Medical Service Corp.  At that time the Vietnam War was escalating. I spent three and a half years in the lay medical wing and was deployed in Vietnam as a lay medical administrator. I had 10 assignments on three different continents in 39 months! After the war I took my first civilian healthcare job at Baylor Hospital in Dallas and have been in healthcare ever since until my retirement from Kansas Heart Hospital in January, 2012.”

News Beat: “I know you have held multiple positions in healthcare from service line director all the way to CEO. Any thoughts about your professional journey?

Lynn: “I believe in total I have held about ten different positions over the years. From 1985 through 1991, I was CEO in Dodge City and became aware of the Kansas medical landscape. Later in the early 1990’s I worked in long term acute care hospitals in both Kansas City and Topeka.

News Beat: “How did you end up at Kansas Heart Hospital?

Lynn: “In February, 1998 I was working on two consulting projects when I received a call from Dr. Greg Duick who was the co-CEO at the Kansas Heart Hospital at the time. It was a Saturday afternoon and he asked me to visit Wichita the next day. I agreed and drove up from Edmond, Oklahoma and after several more phone conversations, I signed on in April, 1998. The rest is history so they say!”

News Beat: “Kansas Heart Hospital was controversial in its early days. Why?”

Lynn: “The existing hospitals in Wichita saw the Kansas Heart Hospital model and its physician ownership and governance structure as a competitive threat. Our model was unorthodox. It centered on fixed nursing ratios and hired only cardiovascular RN’s which provided an unusually high skill level. Patient surveys consistently gave Kansas Heart extremely high marks in service and quality.”

News Beat: “Did Kansas Heart Hospital have an advantage over its competitors?”

Lynn: “As a “start-up” hospital, it could build from the bottom up, develop and support its own culture without having to deal with or change existing cultures. That was advantageous. Its continued success has been a reflection of staying true to its mission and culture.”

News Beat: “Lynn, what do you miss most about the hospital since you have retired?”

Lynn: “It’s the lack of people interactions. I worked with those folks for many years. I do not miss my hospital cell phone or the 6:45 AM weekly leadership meetings!”

News Beat: “Thank you, Lynn, for your time. Enjoy your well deserved retirement and come back anytime.”