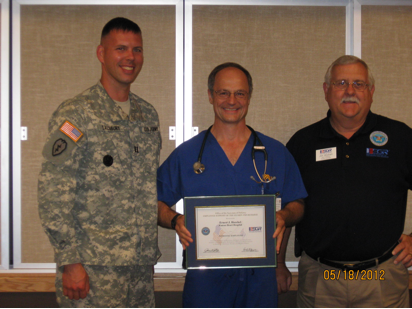 Representatives of the Employer Support of the Guard and Reserve presented an award to Kansas Heart Hospital and anesthesiologist Ernie Hoeckel for their support of a worker who was recently deployed to Afghanistan.

Hoeckel and hospital officials were presented this morning with a Patriot Award for supporting Jeremy Salsbury, a nurse anesthetist who serves as a captain in the Army Reserves. He returned May 4 from a four-month deployment in Kunar Province with the 948th Forward Surgical Team.
Salsbury said the hospital and Hoeckel provided “above and beyond” support to him and his family while he was away, including routinely checking in with his family to see if they needed anything.

“It was very reassuring to me,” Salsbury said.

Hoeckel said it would be impossible not to support Salsbury, who he considers an “A-plus” worker and literally irreplaceable. He also said that the hospital stepped up its support of his small department while Salsbury was away.

“As far as my contribution … I consider it pretty darn minimal,” Hoeckel said.