Kansas Heart Hospital had one chief operating officer in its first 12 years in operation. 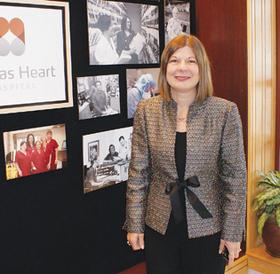 er knew when she took over the job this month that she and the hospital were in unfamiliar territory. Heismeyer started at KHH on Oct. 3. She’s succeeding Lynn Jeane, who plans to retire in January.

It’s the hospital’s first executive-level transition, but Heismeyer says she’s had little trouble feeling like part of the team.

She says she has been impressed with KHH’s culture and the stability of its leadership.

“You could tell that the employees are truly happy with their jobs,” she says.

The opportunity to be part of that, she says, was too good to pass up.

Heismeyer says she hopes to build on the foundation Jeane helped lay.

“Lynn has been very well respected,” Heismeyer says. “I want to keep his legacy going.”

As COO, Heismeyer will oversee about 125 of the hospital’s 250 employees. The 54-bed hospital is near Webb Road and 37th Street North.

Heismeyer, 53, will be working with Jeane in the coming weeks as he transitions to retirement.

Heismeyer has more than 20 years’ experience as a health care executive, most recently as CEO of Allen County Hospital, a 25-bed facility in Iola.

Heismeyer says she knew early on that she wanted to work in health care. She saw how health care professionals helped close members of her family during their times of need, and she wanted to help others in a similar fashion.

“That certainly left an impression on me,” Heismeyer says.

She received her associate’s degree in nursing from the University of Arkansas and later received her bachelor’s and master’s degrees from UA campuses as well.

Heismeyer spent 18 years in leadership positions at Northwest Medical Center in Springdale, Ark., before going to Allen County in 2008.

She has a background in nursing, which Dr. Greg Duick, president and chairman of Kansas Heart Hospital, says is a good match for the hospital.

“She will fit nicely into our patient-centered nursing model of health care delivery,” Duick says. “She marries the best of a nursing background and an administrative background. That was very appealing.”

Heismeyer is looking for a place to live in the Wichita area and is staying with her brother in Yoder in the meantime.

Her husband, Fred, remains in Iola, where he is a teacher. He will finish the school year there.

The two don’t have kids, but they do have two dogs.

She plans to join a local Rotary Club because she enjoys participating in the organization’s service projects.

“I’m excited to make the transition to Wichita,” she says. “I’m looking forward to a long career here.”

Click here to go to the Wichita Business Journal article.