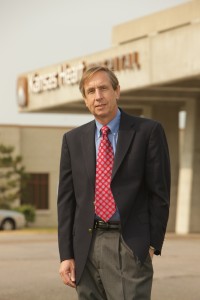 After 33 years in medicine, Dr. Greg Duick is retiring from his cardiology practice and will take on a larger role as president of the Kansas Heart Hospital, a facility he co-founded.

Duick already serves as chairman of the board at Kansas Heart, which was founded in 1999.

Duick says he will have added responsibilities as president of Kansas Heart Hospital, located at 3601 N. Webb Road.

His new duties include corporate leadership, working with regulatory agencies and developing relationships with physicians and hospitals in rural areas.

“Part of the job is education,” Duick says.

Serving as president, Duick says, will give him more structure with his daily schedule.

He says he has worked in an on-call capacity for most of his career because of the urgent nature of his practice.

This will be the first time Duick has focused solely on administrative responsibilities of Kansas Heart Hospital.

He said then that overseeing the day-to-day operations while managing his practice was too much to handle.

Click here to read this article in the Wichita Business Journal.