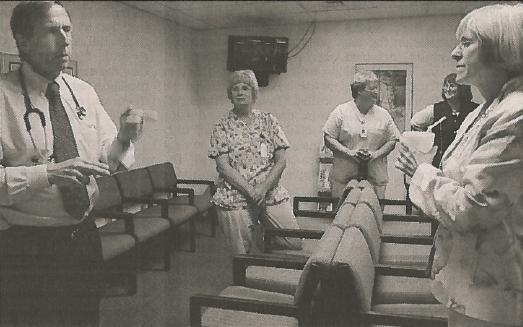 Duick said he now has seen three generations of some families, saying he often hears, “You treated my grandfather.”

“When they tell you it’s their great-grandfather, it’s time to retire,” Duick joked.  He is not retiring; the hospital just wanted to thank him for his service.

Duick said his hopes for the future of the clinic include recruiting more physicians to Iola.

"Just to maintain (the clinic) will be difficult if a new cadre of doctors isn’t recruited,” he said.

That’s because patients prefer to stay in their home communities for care, he said.

“Most of the patients I see never go anywhere else for care,” Duick noted.

He noted allied health – the addition of nurse practitioners and physician assistants as primary care providers – is essential to offering health care in rural communities.

“The heart and soul of any hospital isn’t the doctors, it the nursing staff and the hospital support staff.  Everything spreads from that,” Duick said.