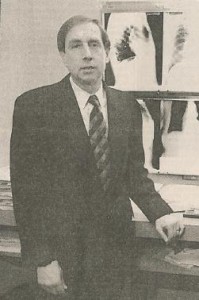 If the vision process accurate, the Kansas Heart Hospital is bound to rake in profits by staking claim to a growing market in managed health care. In doing so, it could also serve as an example that specialty hospitals-in this case, focusing on cardiology-can rekindle a movement for physician control over patients. It could be precedent-setting.

Cardiologist Gregory Duick and cardiothoracic surgeon Badr Idbeis announced plans for the 40-bed cardiovascular hospital earlier this month, saying they want to regain control over patient care. “We’re losing control of how we take care of our patients,” Idbeis said. “We don’t like it and we need to do something about it.” The hospital is slated to open fall 1998 on Webb Road near K-96.

A group of about 30 physicians will provide 60% of the $10 million cost of the project; Via Christi Health System has signed a letter of intent to pay the remaining 40%. Even though Via Christi has signed on as part owner of the heart hospital, its cardiac unit will also be considered competition for Duick and Idbeis. Between the St. Francis and St. Joseph campuses, Via Christi has about 200 beds available for cardiac care.

Columbia Wesley Medical Center, which also owns Wichita Laboratories, has 19 beds in its coronary care unit, but many others it can use for heart patients in intensive care. Riverside Hospital has eight beds in its cardiac unit. Duick said that although area hospitals do a “very fine job” of treating cardiac patients, there is a need to open a hospital at which doctors, not budgets, will determine procedures and length of stays.

“We are trying to make a point that with physician control of a focused, single-specialty hospital, we felt that we wouldn’t sacrifice quality as we attempted to deal with cost,” Duick said. In the traditional hospital setting, administrators, not physicians, dictate where budgets should and should not be cut. “We hope that in our arrangement, we should be able to have a whole lot more efficiency, in such a way that we can meet managed-care contracts without compromising patient care,” Idbeis said.

“In the past, there weren’t cost constraints so if you thought a patient needed it (a procedure or care) you did not factor in the cost. Our training programs didn’t make us think cost-effectively. They thought all things to all patients at all times. That thinking has drastically changed,” Duick said. “The heart hospital will employ about 100 people, including direct-patient care and clerical positions. If Via Christi plans any layoffs in its cardiac units, then the heart hospital will try to absorb some of those employees,” Duick said. Via Christi’s move to form an alliance with the heart hospital was savvy and forward-looking, said John Runningen, a national health industry analyst at Robinson-Humphrey, a research firm in Atlanta.

The heart hospital will likely take away one of the largest sources of revenue at both Via Christi and Wesley. Cardiovascular care is chronic in nature, requiring multiple doctor-patient visits or hospital stays over a long period of time - an expensive proposition for an insurer. That can add up to 40 percent of recurring revenues for any hospital, Runningen said. The scenario has proved true in McAllen, Texas. There, MedCath, Inc. – the nation’s leader in specialized heart hospitals -  announced a $300,000 profit in January at its first hospital that opened just 14 months ago.

“If you look at it, 40 – 60 percent of the U.S. profitability is in cardiovascular care,” said Steve Puckett, president and founder of MedCath. Leroy Rheault, president and chief executive of Via Christi, said he could not determine the future impact of a hospital that will not be constructed for another one and a half years.

“Some heart patients that would normally be treated at Via Christi will be admitted to the heart hospital using “payment plans,” Rheault said. Changes in staff that may occur because of the heart hospital were not budgeted when Via Christi announced staff reductions in January, Rheault said. “You’re not going to see a decrease in staff that would be a result of this for at least a couple of years,” Rheault said. The 60-be MedCath hospital in McAllen has taken profits away from the other two traditional hospitals in the city – one was owned by Columbia / HCA and the other by Universal Health Services. MedCath which has seen 82 percent growth in sales since1991, is opening another heart hospital in Little Rock, Arkansas, this week. It is also planning hospitals in Austin, Texas, Bakersfield, California; Phoenix and Tucson. Opening a specialty heart hospital almost anywhere is a lucrative idea, Puckett said. According to the Dartmouth Medical School, more angioplasties – which cost about $20,000 each – are done in Kansas than anywhere else in the nation.

The Kansas Heart Hospital will be equipped to do all standard cardiac procedures, such as angioplasties and coronary bypass surgery. The only procedure it will not be able to do is cardiac transplantation. “They’re going to get resistance from their competitors, ‘cause they’re sucking the most lucrative patients out of those hospitals,” Runningen said. Without addressing specific revenue figures, Rheault said cardiac care is a large amount of business for Via Christi. “We’re probably one of the top eight programs in the United States in terms of volume,” Rheault said. Wesley doesn’t have an ownership in a free – standing specialty hospital because it was proved too expensive, said Niels Vernegaard, chief operating officer.

“We all have the same services,” Vernegaard said. “But because ours is part of a general hospital, we have the ability to expand or contract our services.” The competition between hospitals will lower prices and increase quality of care, Idbeis said. “It’s good for quality of care. We all work harder,” he said.

The 47,000 - square foot facility will be built on slightly greater than eight acres owned by Via Christi. Groundbreaking is scheduled for June.